What the British Invented – From the Great to the Downright Bonkers

Journalist, Travel Writer and Author Gilly Pickup gives us a unique insight into her new book which has been published just in time for Christmas 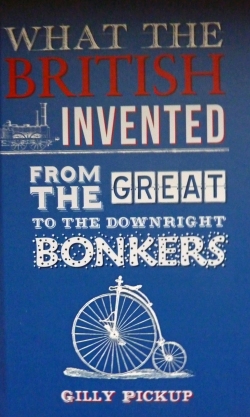 My latest book, What the British Invented – From the Great to the Downright Bonkers, (Amberley Publishing) was a delight to research and write. Of course before I started out on the task, I knew that we Brits have always been a remarkably creative bunch, but I didn’t quite realise the extent of our inventiveness until I started to work on the book.

These inventors have not only done so much to improve our daily lives, but in many cases have also changed the world around us. Marvellous British inventions helped us win the Second World War courtesy of Scotsman Sir Robert Alexander Watson-Watt’s radar; smoothed the path of travel by way of Edgar Hooley’s tarred road surfaces and literally lit up all our lives thanks to Joseph Swan who developed the modern incandescent lamp – did you know his house was the first in the world to be lit by electricity?

Ah and what about chocolate, surely a world without the stuff would be unthinkable – at least it would be if you’re a chocoholic like me. Bristol company Fry and Son made the first bar of chocolate from a mixture of cocoa powder and sugar with a little melted cocoa butter that had been extracted from the beans. It was coarse and bitter by today’s standards, but nevertheless still a revolution. Yes indeed, 18th century France produced tablets and bars, but Fry & Son made the first bar of chocolate as we know it today.

In the field of medicine, Brits led the way again with everything from aspirin, ibuprofen and chloroform, to penicillin, hypnotism, the portable defibrillator and the hypodermic syringe.

Most of us go away a couple of times a year on holiday. Thomas Cook from Market Harborough is the man we have to thank for that, since he is credited with inventing the package holiday. Meanwhile in 1835 Shetland sailor Arthur Anderson, a man of remarkable negotiating skills, proposed the idea of sailing for pleasure as a passenger in an ocean going vessel. He co-founded the General Steam Navigation Company, later the Peninsular Steam Navigation Company which is now known as P&O, a major operator of passenger liners.

Quite possibly though, the one invention which has completely changed the world is the World Wide Web. London born Tim Berners-Lee, a physicist and computer scientist, was the brains behind this one. By late 1990 he had built all the elements necessary to deliver his new concept, including the first browser and the first website http://info.cern.ch. While looking for a name for this new invention, he turned down ‘The Information Mine’ – TIM – his initials and modestly called it the World Wide web.

My book is an amalgam of facts to interest the trivia buff, the downright curious and those of us who have no doubt that Britain is ‘Great’ but occasionally need a prod to remind us why.
Whether you want to learn something, to smile, be amazed or need an extra boost of patriotism, there is something here for you. You can read it from cover to cover or open it at random. I guarantee you will stumble upon something to interest you.

Click What the British Invented: From the Great to the Downright Bonkers