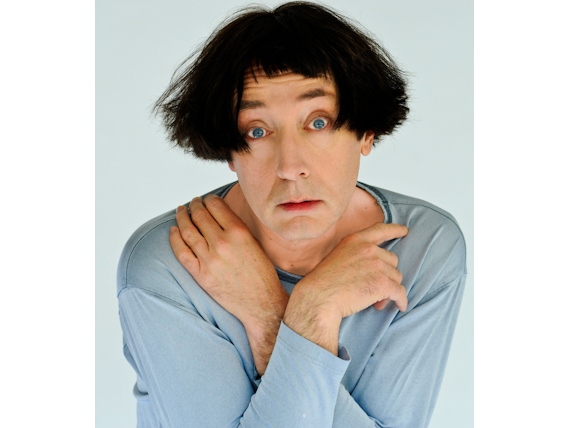 I’ve attended many festivals over the years, including sitting in a field of mud, listening to hairy men mutilating their so-called greatest hits, but a comedy festival is a new one for me. The Just for Laughs festival is a veteran, now on its 24th edition, and takes place every year in Montreal, Canada. They claim that for two weeks, at the end of July, Montreal becomes the funniest city in the world so, needing cheering up, I cross the Atlantic to check it out.

Festivals are a mainstay of Montreal’s summer and they’ve pedestrianised Rue Ste Catherine, a street close to the centre of town, in the middle of the “Quartier des Spectacles” entertainment district. All the Just for Laughs performances take place here, and every venue is within easy walking distance – it’s not unusual to see comedians hoofing it to their next gig. What’s also useful is that they stage the Bouffons Mtl! festival at the same time – food trucks ply their wares on the street, so you can grab a bite when you’re in between shows. And, if you’re a really comedy groupie, you can stalk the bar of the Hyatt Hotel where comics drink until the small hours.

Workshops and other events are held during the day in the Hyatt, but the ticketed performances start early evening and continue until well after midnight. There’s a bewildering variety of comedians on display, with the emphasis on North American performers, but it’s great to catch up with comics in far more intimate venues than you’d find them in the UK. You can either buy individual tickets or opt for different sorts of festival passes which give you multiple entry.

I decide to start off with a pot-pourri of British comedians, playing in Club Soda, a small venue with everyone sitting at tables. Mark Watson makes a competent compere and ensured that nobody runs over their 15 minute time slot. If anything this works as a major limitation because nobody really gets the chance to strut their stuff. Russell Kane’s energetic show gets a reasonable response from the audience but Gina Yashere, a black lesbian living in New York, really seems to relate to the crowd. I like Nish Kumar for his intelligent provocative Asian humour, and chuckle at Daniel Sloss’s self-deprecating Scottish patter.

Later the same night I catch Katherine Ryan doing a solo spot in a tiny upstairs room. She’s back in her native Canada, after establishing herself in the UK, and goes down well with the local crowd, particularly focusing on the small town where she grew up. Nobody, whether family or friends, is spared her brand of blistering scorn as she reminds herself why she decided to leave in the first place. It’s an assured performance in this intimate venue and I leave wanting more.

What I’m learning about the festival is that the advantage, or disadvantage of smaller venues, is that people in the crowd are certain to be picked on. Even though Jimmy Carr is playing a relatively large theatre he hones on one audience member, who’s attempted a limp heckle and carefully picks apart the character of his mother. Carr is really in top shock mode and he certainly doesn’t disappoint, although I think some of his machine gun delivery leaves some of the natives trying to catch up. He even bids a not so fond farewell to David Cameron, who famously disparaged his tax affairs.

You wait for ever and two Carrs come along at once. The famous Chatty Man is on excellent form, again in matchbox sized venue and he notices a bespectacled boy in the front row and labels him as “Little Alan”. The similarity is amazing and it’s something he develops into a running gag, during a flamboyant set packed with digressions, asides and meandering stories. He bounces all over the stage, in his red shoes, screamingly camp but constantly inventive and witty. There’s more than a hint of Kenneth Williams and Frankie Howerd, but it’s none the worse for that.

In the same venue, a few days later, Emo Philips is marking his 40th year of making people laugh. His humour is completely understated, delivering his lines in a high-pitched voice, he fidgets constantly and throws away the punchlines of his gags almost as an afterthought. There’s something fragile about his performance and one woman gets up from the audience to tell him she has a train to catch and has to leave. He keeps her on stage for ten minutes, distractedly muttering away and making her the butt of his meandering gags. It’s a disarming performance and makes for a night of thoughtful comedy.

Of course the festival is not just about stand-up and prowling TV Execs are always looking to snap up the next big thing. Now in the comedy stratosphere, Julia Louis-Dreyfus has a pure comedy pedigree from Elaine in Seinfeld to the Selina Meyer as star of the political satire Veep. She takes part in a chat format in the biggest venue with fellow cast members Tony Hale (Gary) and Timothy Simon (Jonah) and show runner David Mandel. Executive Producer Frank Rich moderates the event and it’s all a bit too self-congratulatory. They talk us through some of their favourite scenes, and emphasise that tight scripting is important but we don’t really learn much else.

I’m looking forward to seeing Sarah Silverman, but she’s recently emerged from a serious health scare so is unsurprisingly a little rusty. Her performance is full of personal anecdotes, including her time in hospital, although jokes about abortions, periods, and semen come thick and fast. She’s one of the few comedians who’s able to tackle edgy material and deliver it in the style of bedtime story, limiting the shock and horror. The audience are completely with her throughout but the huge venue doesn’t really help with the intimacy her style demands.

It makes a change not to be at a festival where you don’t have to wear your wellies to negotiate the mud. Indeed the location, right in downtown Montreal, couldn’t be more convenient and the sun shines every day I’m there. Grabbing a bite from the food trucks is an added bonus – try Poutine (chips, cheese and gravy with Foie Gras if you want to eat what the locals scoff. I enjoy my few days at Just for Laughs and it’s great to catch the big British comedians close up. I even managed to exchange a few drunken words in the bar with some of them. My biggest regret was that I didn’t research my American comedy more thoroughly, as I feel I missed out on their star names. That’s my homework for next time.