Heliot Steakhouse at the Hippodrome Casino 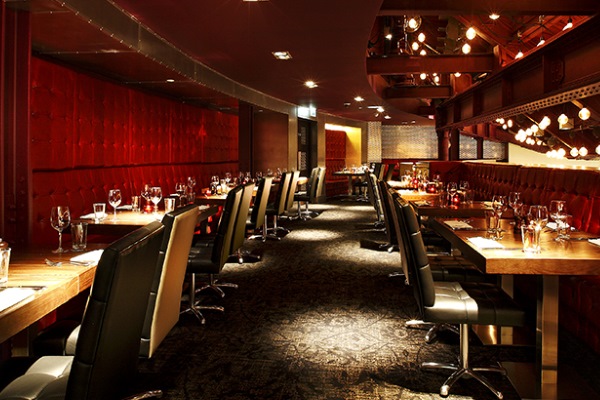 Occupying an iconic building between London’s Leicester Square and Charing Cross Road the Hippodrome has been entertaining Londoners since it opened in 1900. It was originally designed in a circus format and acts featuring horses, elephants, polar bears. As fashions changed it morphed into a variety theatre before emerging in 1958 as ‘The Talk of the Town’ nightclub. The club offered a three course meal with entertainment by top flight stars of the day like Frank Sinatra, Tom Jones and Shirley Bassey. I saw Judy Garland there in 1969, months before her tragic death, my enduring food memory was the rock hard bread rolls which doubled as missiles to pelt acts the audience disapproved of.

Fast forward to today and the Hippodrome Casino after a £45 million facelift is once again welcoming Londoners and visitors through its doors. There are now four gaming floor, six bars, a cabaret theatre and Heliot Steakhouse.

I recently went back there to dine at Heliot, the restaurant is named after the flirtatious and alluring Claire Heliot, one of the early performers at The Hippodrome in the early 1900’s. She was famous worldwide for feeding raw meat to lions on stage.

Arriving at The Hippodrome it has not lost any of its grandeur since my earlier visits. Heliot has a plush feel and it sits in a prime position overlooking the main gaming floor. The combination of a large number of diners and the adrenalin of excitement from the casino floor gave it a very upbeat atmosphere.

As we perused the menu we nibbled on soft warm bread, a far cry from the rolls of the 1960s Garland era. But the changes didn’t end there, it is a testament to British food that the dishes on offer were interesting and inventive.

It’s a short menu but well planned, my wife and I could have chosen any of the dishes and been happy. Although billed as a steakhouse there are lots of other options including seafood and vegetarian.

We dithered over the starters, my wife wavering between the stone bass ceviche and the tuna tartare the ceviche won. My dilemma was either the seared scallops or the smoked salmon, the scallops were the victors. My seafood was well present and served with girolle mushroom and a star anise consommé, the scallops had a good texture and worked well with the girolles.

The presentation of the ceviche was a piece of pure food theatre, the stone bass was served on a raised flat dish with a cube of dry ice dropped in water below. The fish was enveloped in a cloud of carbon dioxide, what emerged were lots of fresh flavours from the fish, citrus juice, chilli, ginger and golden beetroot. The next table had ordered the smoked salmon and it came with its own piece of theatre, it was served under a smoke filled dome. When the dome was lifted it left the very pleasant sweet smell of hickory in the air.

My wife continued her fishy theme with her main by ordering the grilled monkfish, I wanted to try the award winning USDA 28 day aged steak of which there were many sizes and variations. I couldn’t manage a whole steak so the ideal compromise was surf and turf.

My wife’s monkfish, served with baby vegetables and a lemon thyme sauce was moist and tender and my steak and seafood was outstanding. The fillet had great depth and was a great companion to the scallops and grilled prawns. The sauce with this was very intriguing and made from 28 ingredients. We shared a side of thick cut, triple cooked, Pont Neuf chips stacked as is the tradition in rows of three, they were crispy on the outside with a satisfyingly floury middle.

Drinks wise we had started with as U.S. Blue Moon wheat beer although there was a good range of cocktails available. The wine list has a good mix of old and new world and a selection of the month from Australia’s D’Arenberg winery. From this we chose the Stump Jump sauvignon blanc, always a safe bet with fish. It was a good choice, tropical fruits with hints of mown grass in the bouquet developed into greengage and apricot flavours on the palate and the lively acidity gave it a mouthwatering finish.

Although we were tempted by the decadent desserts the large portions limited us to sharing three scoops of very good ice cream.

My wife and I really enjoyed our meal at Heliot and I must give a special mention about the staff who were charming. The buzzy atmosphere, quality of the food and comfortable surroundings made it a memorable dining experience.