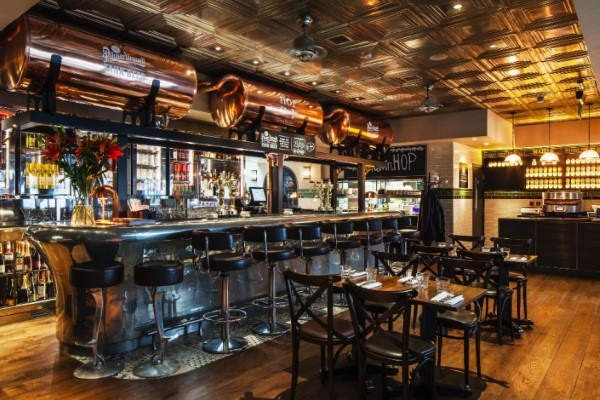 The market at Spitalfields in London’s East End dates back more than 350 years. It sold meat, fish and vegetables until it was moved to Leyton in 1991. This left the old market structure, built in Victorian times, ripe for development. After sympathetic renovation it has emerged as one of the capital’s most vibrant areas featuring market stalls selling everything from flat caps to interior design accessories.

As the popularity of Spitalfields increased so high quality restaurants moved in including the highly regarded Michelin starred Galvin La Chapelle which is in the historic St Botolph’s Hall. My wife and I were recently in Spitalfields soaking up the Saturday morning atmosphere, it was around lunch time so we decided to eat in La Chapelle’s sister restaurant Galvin Hop which is in the Curate’s house adjoining St Botolph’s.

There are four distinct drinking and dining areas in Galvin Hop, a terrace looking out over Spital Square, a cosy bar area dominated by gleaming copper tanks of Pilsner Urquell, more of those later, a light and bright space with a glass roof and finally a quiet summer terrace with sofas where you can sit back and relax on a balmy day. When we arrived the restaurant was very busy and the smart crowd gave the place an upbeat buzz.

On Saturdays and Sundays Galvin Hop serve a brunch between 11:30am and 5:30pm, apart from the food they offer a great value bottomless booze package for £10 per person if you have two courses. You can choose between Prosecco, Bloody Mary or Pilsner Urquell.

We settled into our seats and as a priority ordered our chosen tipple, although there was no rush as there is a two hours allowance for limitless booze. My wife chose her favourite, Prosecco while I was to enjoy the Pilsner but it was no ordinary lager. The Pilsner Urquell served in Galvin Hop is unpasteurised and served straight from tanks that are delivered once a week direct from the brewery in the Czech Republic. This makes the beer ultra fresh and full of flavour.

Before getting to the mains there was a good range of tempting delights like Caesar salad, mix and match fillings for the toasties and crispy chicken wings as a Beer Buddy.

The mains were substantial and included two Galvin signature dishes, the deluxe burger and the deluxe hot dog. After a lot of mind-changing my wife chose the Cumbrian sirloin steak with two fried eggs and chips and I had the burger with cheese, chips and a deep fried ‘wally’.

When we started to eat it was evident that some of the magic dust from La Chapelle’s Michelin Star next door had been sprinkled on the food, everything about it was superlative. My wife’s steak had great depth of flavour and was melt in the mouth tender, the eggs had the deepest yellow yolks we had ever seen and our chips were crisp on the outside with a pillowy soft centre.

My hamburger was juicy with an open texture and the meat had a smoky aroma, this was probably my best burger since first tasting one at the Hard Rock on Piccadilly in 1972. The delicious beef patty sat covered with tangy cheese in a soft brioche bun. The wally, pickled gherkin to people outside London, was nestling in a crisp batter just waiting for it’s briny, vinegary taste to burst out and contrast with the burger. Everything we ate had that unmistakable Galvin stamp of quality on it and the service team who are very friendly and efficient made our meal even more enjoyable.

We had just left enough room for a dessert, would it be the Galvin banoffee pie or the strawberry cheesecake? Our final choice was inspired, a freshly cooked doughnut filled with a sauce and covered in salted caramel. It was a sublime fusion of taste, texture and flavour and the pinnacle of an exceptional dining experience.