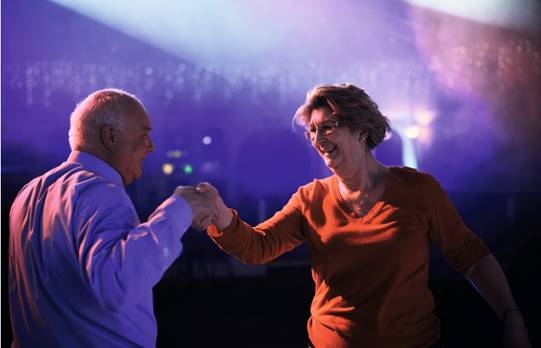 A record number of ‘baby boomers’ are now single and entering a new stage in their life by attempting to join the dating game and it can be a daunting prospect.

According to new research from Warner Leisure Hotels, one-third (33 per cent) of the 2,000* over-50s surveyed claim they worry they will look too old, 27 per cent are concerned about feeling nervous and almost one-in-ten (9 per cent) panic about their own fashion sense. However, the UK’s over 50s seem to be less concerned about themselves and more anxious about their date’s peculiarities.

The research from Warner Leisure Hotels also revealed that men in their 50s are feeling friskier with age. One-third (33 per cent) of men claim they are more sexually liberated now than they were in their 20s, compared to just 20 per cent of women who feel the same. Men also claim to being less fussy about image (27 per cent versus 19 per cent).

Whilst the UK’s over-50s appear to be embracing new dating ventures, almost half (48 per cent) claim they were most confident about dating in their 20s, whilst they pin-point their 60s and 70s as the least confident phase for seeking a new companion.

Mat Finch, Marketing Director of Warner Leisure Hotels, comments: “Younger people have so many places that they can go to meet new people; bars, clubs, work etc, but as you get older this changes and it gets harder to meet someone new.

“At Warner it’s not uncommon to see a dance floor filled at 11pm on a Tuesday night with guests having a laugh and enjoying time together. We celebrate every relationship no matter what the age and we have helped create a few new ones. We have even been asked to connect guests via Facebook after they have met at a Warner hotel.

“We enjoy providing a sociable atmosphere, welcoming guests whether they’re coming with friends, a loved one or alone. Where else do the over 50s go to dance, laugh, celebrate, have fun and meet new and old friends? “

So, what’s the most romantic location for a hotel getaway? A country escape (38 per cent), seafront spot (22 per cent) and city break (18 per cent) top the chart for the UK’s over-50s.Warner Leisure Hotels specialises in UK short activity breaks just for grown-ups. The regional chain of 13 hotels hosts accommodation ranging from listed manor houses to coastal resorts and villages, find out more at www.warnerleisurehotels.co.uk