The Orchid Hunter by Leif Bersweden 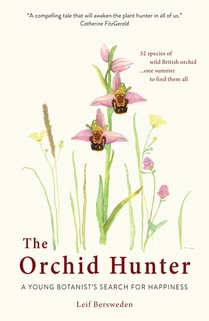 As a plant lover I was expecting to find some interest in the story of a young man’s search for all the orchid species to be found in the British Isles & Ireland. What I was not expecting was to find it almost impossible to put the book down. On a hot summer’s day I sat in my garden (which supports only one native orchid – the most common one) and devoured this book in one sitting.

Not only is the book about Leif’s quest to find all 52 species of orchid in one season, something no other naturalist had done, but it is also offers us a revealing insight into his young life, indeed its is sub-titled ‘A Young Botanist’s Search for Happiness.’ Leif had been hooked on botany from childhood, indeed finding a bee orchid at the age of seven changed his life for ever. He recognised very early that our native orchids are national treasures and indeed they have long been thought of a special, especially the specimens whose petal and sepal formation mimic bees and flies or seem to depict frogs, monkeys and even little men and women. Even their names; Green Winged Orchid, Sword Leafed Helleborine, Musk Orchid, Irish Lady’s Tresses, seem redolent with romance and mystery and have appealed to poets as well as botanists.

Leif describes how his parents, both vicars, encouraged his hobby by taking him on plant-hunting forays which, together with his own research must have made him one of the youngest botanical ‘experts’ in the country. At the same time, as he grew up, he was aware of how this set him apart from his contemporaries who teased him unmercifully for his geeky obsession. This however was something he took stoically, always hoping to find a like-minded companion.

It seemed typical of his character that on receiving a rejection from Oxford he decided to use his gap year to embark on this quest before reapplying. Over the years he had already seen half the native orchids but he knew seeing them all in one season involved much planning and no little expenditure – so he worked as a gardener to finance an old car, applied for bursaries and took a shelf-stacking job in Waitrose to pay for the necessary travel. And only then, with the plan in place and full of excitement, did he set off.

As we accompany Leif on his trip, venturing over moorland, into woods, across limestone pavements, through bogs, up mountains and even into industrial estates, we will him to succeed. We share his enormous pleasure when he finds rare specimens and suffer his dejection when the wet, the cold, and the technological disasters temporarily set him back. We are happy with him when he finds a female companion and sad when she turns him down. It was indeed quite a year.

After which of course he had to sit down and turn these experiences into a book. It was a concept which in the wrong hands could have made dull reading. Leif however, writes very engagingly. He introduces us to each orchid with a good description backed by a clear photograph. He tells us something of the orchid’s life-history – some of which are quite bizarre. He also supplies us with some historical background. It was good to meet some old friends like William Turner, Nicholas Culpepper, John Gerard and John Ray who included orchids in their sixteenth and seventeenth century Herbals; good too to encounter some new amateur plant enthusiasts from the Victorian era, many of whom were women. (But how depressing to read that our native orchids were at one time picked by the armload either to sell or to put in private herbaria.)

Just sometimes for the non-botanist the technical information about such things plant DNA get a bit complex but then this is a book which will delight a wide spectrum of readers up to an including Leif’s fellow orchid experts.

At the end of the book Leif, now having completed his degree at Oxford and doing his PhD at Kew, generously shares his knowledge as to where these orchids may be found in order to encourage others, and one feels, especially young people, to take an interest in our native plants. This chimes with the concern of Robert Macfarlane recent book The Lost Words. In fact Leif ‘s writing reminds me of Macfarlane’s. I feel he is a worthy successor, just as this book is a valuable addition to British nature writing.

The Orchid Hunter is published by Short Books in paperback @ £8.99.