Autumn in Venice – Ernest Hemingway and his last Muse 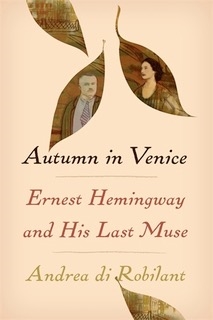 In this engagingly written and meticulously researched book Andrea di Robilant traces Hemingway’s obsession with the young Venetian girl Adriana Ivancich who inspired the character of Renata in Across the River and Into the Trees. Although not considered amongst his best works, it is one I do enjoy, mainly for the Venetian setting. However, I’ve come to the conclusion that it is maybe best not to know too much about the personal lives of writers one admires; W.B. Yeats is one such and Hemingway would appear to be another.

In 1948 Hemingway then aged nearly 50 and world-famous, visited Venice for the first time. He was accompanied by his (fourth) wife Mary and from their luxury suite at the Gritti Hotel they quickly slipped into the inner circle of Venetian society which met at Harry’s Bar, amongst them was Carlo di Robilant, the great-uncle of the author of this book. From there the Hemingways embarked on a round of drunken evenings, country house visits and shooting parties.

It was in fact, on the way to a duck shoot out on the lagoon that Hemingway first saw Adriana who was then 18. The Hemingways had decamped to Torcello so that Hemingway could write in peace and Mary had not come on the shoot. It was wet day and Adriana, who was family friend of the host of this party and had come just for the scenery rather than to shoot, was standing waiting at a crossroads looking wet and weary. On the way back from the shoot Hemingway invited her for drinks at Harry’s Bar. He then invited her to lunch with him at the Gritti the next day. As Mary was still on Torcello, they would be alone and according to the strict Venetian mores it was unacceptable for an unmarried girl to dine alone with a man without a chaperone – but Adriana probably flattered, accepted. Hemingway who had been immediately and deeply smitten, didn’t see, or chose not to, what it might do to her reputation – or his marriage.

Thus began their ambiguous affair, a sort of amitié amoureuse, in which although they possibly didn’t have intercourse, they had a very deep and very special involvement, which lasted for years. They met again skiing at Cortina after which Hemingway followed Adriana back to Venice and was observed by gossips ‘drooling over her’ at Harry’s Bar. It was at this time then he asked her if he could ‘borrow’ her for the character in the book he was writing. Flattered she agreed. Her mother in an attempt to diffuse the developing situation invited him to their house so that he could pass as a ‘family friend’.

The Hemingways eventually returned to their Finca on Cuba and missing Adriana, Hemingway busied himself with the book in which she featured so prominently as the character Renata. This was obviously some sort of sublimation but soon they set off on another European trip during which Adriana who was now 20, saw Hemingway frequently. His passion undimmed and feeling he could not go for long without her, he invited her and her mother to come to Cuba. Throughout this time his wife Mary to whom he had been married for only 4 years when he met Adriana had to tolerate the situation which became more and more fraught, especially when Across the River came out in Europe and rumours seemed to be substantiated by Adriana’s presence in Cuba. Adriana meanwhile flirted with young Cuban men, which irritated Hemingway, something of course, which he took out on Mary.

One good thing to come out of this time in Cuba was the fact that with Adriana near him he had a renewed burst of creativity which resulted in The Old Man and The Sea for which her won the Nobel Prize. Nevertheless the cost for both of them, to say nothing of Mary, was very high. Adriana did marry, a jealous Greek who forbade her to communicate with Hemingway. Hemingway old, ill and unhappy eventually committed suicide – and sadly some years later, so did his last muse, Adriana.

A powerful story which di Robilant tells with clarity and eloquence.