Patricia Cleveland-Peck reviews this monograph, handsomely bound in cloth and containing many paintings never seen before, is a companion volume to East End Vernacular, also published by Spitalfields Life Books and reviewed here… on 20th November 2017 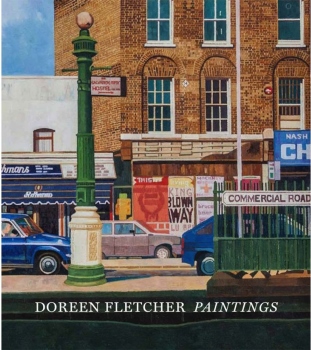 As well as depicting the urban landscape of East London this book also highlights a heart-warming human story. The artist Doreen Fletcher had drawn and painted since her earliest days, working hard and producing numerous works. She had taken part in a couple of shows but she had never received any real recognition. So in 2004, defeated by lack of interest, she gave up painting and put all her pictures in the attic.

By chance someone sent an email to the editor of Spitalfields Life Books with a blurry image of one of Doreen’s paintings attached. He was impressed by her art and intrigued by her story and after meeting her and seeing more of her paintings, he arranged an exhibition at Fiona Atkins’ Townhouse in Spitalfields. Since then Doreen has found that there is a very appreciative public out there which loves her work. She is now busy painting again and preparing for forthcoming exhibitions of her work.

The paintings in this book, all meticulously executed, are mainly of buildings which are no longer there. Doreen says she was always drawn to trying to capture the ‘almost gone’ and so preserving something of the special atmosphere of the East End. As she herself puts it, “Be it the changing use of buildings, the crumbling of dry stone walls, abandoned terraces and disused barns, faded shop signs, dilapidated street furniture or graffiti, they are all the stuff of my pictures, to be recorded before being swept away.” Thus, by painting things which have since vanished, Doreen has created social documents as well as works of art.

From the introduction of the book we learn that she was born in the Potteries, the only child of loving but as she puts it, ‘semi-literate’ working class family. She was clever but suffered at school, only relaxing in the art class. She knew her vocation was to be an artist and eventually moved to London where she became excited about the urban landscape and began painting local landmarks. At this time she worked at her painting a minimum of 28 hours a week (which she still does) while supporting herself as an artists’ model. Like many artists she gravitated to the East End for the cheap studio space and the presence of a sympathetic artistic community but what also attracted her was the light. She loved the ‘luminosity generated by the proximity of the river’ and indeed one of the most noticeable things about her paintings is the way she captures the quality of light.

This is evident not only in her daytime paintings with their wide skies such as Grand Union Canal in Summertime and Mile End Park with Canal but also in a series of extraordinary evening and after-dark paintings including After the Hurricane Shadwell with its silhouette of a tree against a magnificent pink sky and Twilight, Mile End Park in which a gasometer gleams against a leaden, pink-streaked sky with an abandoned warehouse in the foreground.

In fact disused and derelict shop fronts and dilapidated buildings make up the bulk of these paintings, they speak of emptiness and abandon and although Doreen rarely includes people in her works, they evoked in me the same feeling of loneliness as do the paintings of Hopper. When I first saw The Condemned House, I almost shivered. To be able to create atmosphere in this way is a very special gift which together with Doreen’s consummate technical skills makes her works unforgettable. Further, the life of the artist is always unpredictable but that Doreen Fletcher is at last recognised as an important painter must surely give hope to others struggling for acceptance.

This is another ideal book to give as a present to anyone who loves art, life and London