Proof that pigs can fly 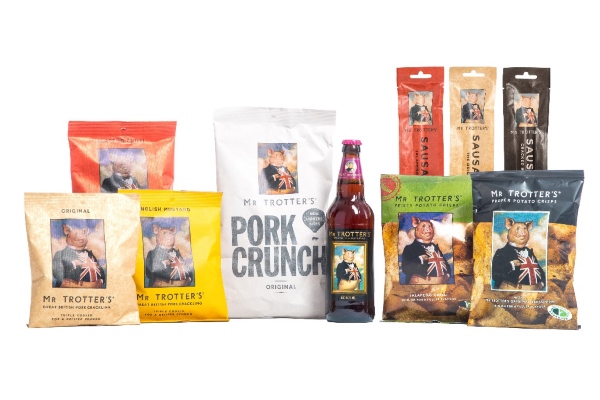 Mr Trotter’s Original Pork Crackling, which was named Britain’s finest ‘Savoury Snack’ at the ‘Q Quality Food Awards’ in 2018, is happy as a pig in clover after his success at the Great Taste Awards 2019. He scored a mighty:

Mr Trotter’s Original Pork Crackling was praised by judges as:
“A good crunchy crackling, light and we can tell this is triple cooked. A good crunch and very addictive. We love the deeply savoury taste and salty burst – very delicious. Superb pork flavour and lasting satisfaction. The pig was a good one.”

Mr Trotter’s was established in 2011 to pioneer a reinterpretation of that most quintessential of British snacks, the pork scratching.

“Our hero pig’s zesty attitude and style have seen him trot smartly into yet another winners’ enclosure. Pork scratchings are a British icon, like gin, smoked salmon, tea, Winston Churchill and mushy peas. But when we set out to add real quality to the pork category, we had no idea that so many awards would follow, praising Mr Trotter’s flavour, texture and signature crunch.”

The 2019 Great Taste Awards judged 12,772 products from over 100 countries on taste, with no regard for branding and packaging. Just 12% of these foods and drinks were awarded a 2 or 3 star rating.