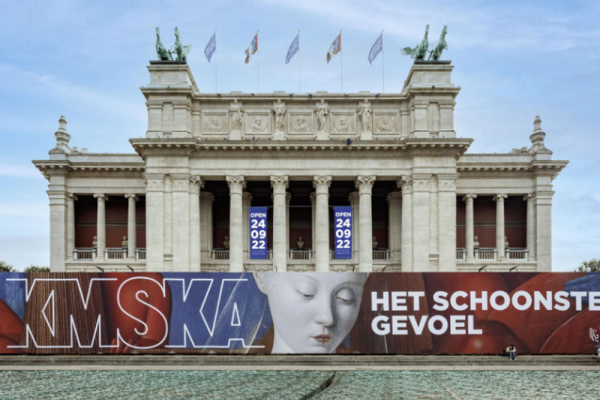 The Museum of Fine Arts Antwerp (KMSKA) will re-open its doors after a comprehensive renovation. Flanders’ largest museum is a cultural hotspot for art enthusiasts from all over the world: the collection of fine arts spans seven centuries and is one of Europe’s greatest galleries. Paintings by Flemish primitives such as Jan van Eyck and Hans Memling and important works by Peter Paul Rubens, Amedeo Modigliani and Auguste Rodin are part of the collection, as are paintings by Quinten Massys, James Ensor and Rik Wouters.

In its imposing building with freshly restored historical and redesigned rooms, the KMSKA now wants to make its rich art tradition and art-historical expertise accessible to a wide audience again – in line with its vision of enchanting, enriching, and connecting people.

From master plan to re-opening

In 2001, the KMSKA started a unique process: based on a master plan, this temple of art was subject to a profound re-design in three phases. The result is impressive: the new spatial concept gives the museum an additional 40% of exhibition space without compromising the building fabric and atmosphere of the building, which was built in the 19th century.

The four historic exhibition rooms with their stucco ceilings, wallpaper, curtains and parquet floors have been professionally restored. For example, the Rubens and Van Dyck rooms regain their former charisma complete with its golden cornices. Visitors can now also follow the historical route through the museum again.

At the same time, bright, daylight filled new halls and state-of-the-art technology were created from four existing courtyards. These rooms were built into the existing building, as it were. Together, the new and historical wings give the museum a strong and exciting dynamic experience where visitors can visit two museums in one.

For the reopening, in addition to the masterpieces in the exhibition rooms, visitors can also look forward to the restored mosaic floors and a large new floor mosaic in the entrance area. Furthermore, the newly created museum garden with its carefully selected sculptures from the collection with its abundance of newly planted saplings offers a haven for peace and relaxation for museum visitors, as well as for the residents of Antwerp’s lively Het Zuid district.

From Rubens to Rodin and from Ensor to Rik Wouters

The KMSKA is one of the most important museums of fine art in Europe. Its collection spans seven centuries and offers an almost complete overview of Flemish and Belgian art from the 14th to the 20th century. Characteristic of the museum are the collections of Flemish masters with some monumental works by Peter Paul Rubens and other representatives of the Baroque era. The collection includes world-famous works such as Rubens’ Adoration of the Kings, as well as numerous altarpieces by this Flemish master. Also on display are paintings of the “Flemish primitives” such as Saint Barbara by Jan van Eyck and God the Father with singing and music-making angels by Hans Memling.

The museum also displays numerous international masterpieces by Jean Fouquet, Titian and Amedeo Modigliani, among others, as well as sculptures by Ossip Zadkine and Auguste Rodin.

While the museum remained closed to the public for over 10 years, its curators were kept busy. They were tasked in considering the presentation of its collection of more than 8,400 works critical revision: Which works are really central and representative of the KMSKA, was the core principal in this process. The result is a shortlist of three iconographic works, each symbolizing an important sub-collection: The Madonna and Child surrounded by Seraphim and Cherubim by Jean Fouquet as a symbol of art until 1880, James Ensor’s Intrigue as a decisive milestone in art history and Le dernier jour by Pierre Alechinsky as a symbol of art after 1880. Each of these three works has a central position in the presentation of the new KMSKA.

In addition, there are 25 highlights of the collection: masterpieces that are an elementary part of every visit to the KMSKA and include such important artists as Rubens, Van Eyck, Modigliani, Ensor and Magritte. And finally, another 100 centrepieces of the collection, which provide a deeper insight into the museum’s collection activities and exhibition concept.

Clear vision: education and mediation for a broad audience

The Royal Museum of Fine Arts Antwerp attaches particular importance to its scientific research work, for example on James Ensor and Peter Paul Rubens, as well as to the target group-oriented mediation of art and science. The KMSKA aims to be an open, inviting and accessible place for everyone and therefore relies on creativity, participation and experience in its future museum educational work.

More information about the renovation and re-opening can be found on https://kmska.be/en