Peter Morrell visits this family owned Hampshire vineyard to meet the owner, the winemaker and to sample their world class sparkling wines 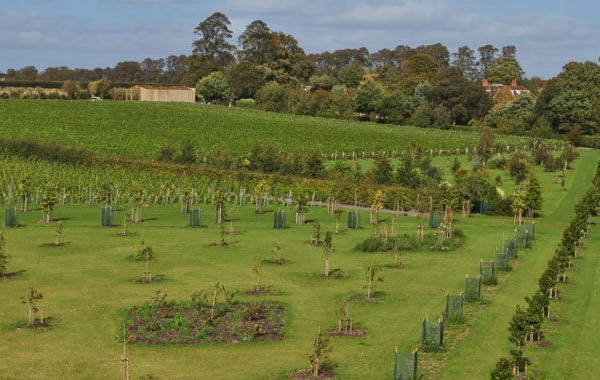 A mission to buy antique oak furniture about 15 years ago provided Simon Bladon with the serendipitous moment that launched him as a successful vineyard owner. The sale of the furniture was being held at Nyetimber and the refreshment a glass of their renown sparking wine which Simon found very impressive.

Wondering what to do with a disused hop garden on his property Simon decided that it would be ideal as a vineyard. The land was a south facing slope with greensand soil bordered by chalk above and below, similar to Nyetimber, it was an ideal environment for growing champagne grape varieties.

So in 2004 Chardonnay, Pinot Noir and Pinot Meunier vines were planted. This was followed by the acquisition of an adjacent plot and further planting took place in 2007 and 2010. There are now 15,000 producing vines on 12 acres.

I recently went to see Simon at Jenkyn Place located in a particularly attractive part of Hampshire. The house and estate are both the family home and location of the vineyard.

I was shown around by both Simon and the winemaker Dermot Sugrue, a very genial and enthusiastic Irishman who cut his brewing teeth beer making in his native Ireland. Dermot has an interesting history, after studying Viticulture and Oenology at Plumpton Agricultural College in Sussex he had stints of working both in France and the UK before joining Nyetimber in 2003 where as head winemaker he established that estate’s reputation. He subsequently moved to the Wiston Estate vineyard which is where the Jenkyn Place grapes are vinified.

As we walked past serried rows of vines which were showing the first signs of Spring life we talked about the challenges of growing grapes in the variable English climate. The timing of the harvest is critical and as the grapes are hand picked planning is of the essence.

Vineyard tour over it was time to go back to the house, an impressive 17th century Grade II listed building, to sample the fruits of all this labour in the large, rustic tasting room. The first two vintages, 2006 and 2007 Brut Cuvée were created by the highly regarded Ridgeview winery in Sussex before production moved to Wiston and under Dermot’s control in 2008.

We would do a vertical tasting, tutored by Dermot, starting with the latest vintage, a 2010 and then go right back to 2006. This was absolutely fascinating, my first observation was the consistently high quality of all the wines. As we walked back though the years we observed the effects of changes in the percentage used of each grape and the time the wine was left on the sediment. All the vintages were Chardonnay led so there were strong elements of fruit in the bouquet. Each wine had its own character and the differences were most marked on the palate, different years showing buttery flavours, smoky aromas and flinty tones, they all had good mouth feel.

The Brut Cuvée currently available to buy is the 2010, this had a bright, lively nose, was fruity with hints of yeasty toast on the palate and it left a crisp, clean finish.

In 2008 and 2009 Jenkyn Place produced a sparkling Rosé which I tasted. The 2009 was made with 80% Pinot Noir and 20% Chardonnay this was a lovely wine. The characteristics of the Pinot Noir presented well on the nose with savoury aromas and a whiff of the country, this developed into a very fruity palate and left a good, strong finish. The 2008 which was 44% Chardonnay, 42% Pinot Noir and 14% Pinot Meunier was also good and fruity but I think the much greater dominance of Pinot Noir in the 2009 vintage gave it the edge.

My final sampling was the Blanc de Noir 2010 which features an equal split between Pinot Noir and Pinot Meunier. This had a fresh, uplifting bouquet which carried onto the palate where it showed crisp apple and toasty flavours before leaving a long and satisfying finish.

This has been a great success story and proof positive of the quality of wine that can be produced in England if you choose the right terroir and employ the skills of an expert winemaker.

The two wines available for purchase are:

A blend of 50% Pinot Noir, 50% Pinot Meunier
Available from jenkynplace.com. amazon.co.uk, The Cave, Christopher Piper Wines and Vagabond with an RRP of £35.50

For more information go to www.jenkynplace.com