Virginia is for Wine Lovers

Peter Morrell is highly impressed with the wines from four of the top vineyards in this relatively undiscovered U.S. State 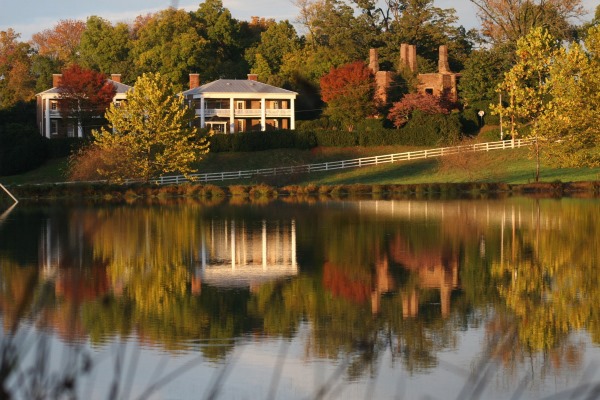 I recently attended ‘Virginia Uncorked’ a wine dinner hosted by Governor of Virginia Terry McAuliffe and State Agriculture Secretary Todd Haymore. At the dinner I had an opportunity to taste wines from four of the top vineyards in the State and to meet the vintners from three of them.

Virginia is relatively unknown to people in the UK, not just the wine but its rich history, delicious cuisine and lively country music scene. On the heritage front two major figures in the war of independence, Thomas Jefferson and George Washington were born and lived in Virginia. Food-wise its cuisine is dominated by the shellfish from Chesapeake Bay with delights such as scallops, clams, blue crab, soft-shell crab and oysters.

My evening began with a sparkling start, a 2009 Blanc de Blanc made with 100% Chardonnay. It was crisp and fresh with green apple notes on the nose leading to brioche and hints of citrus on the palate. The big surprise was the name of the vineyard owner, Donald Trump, the winery is run by son Eric and they are producing top quality vintages.

Before dinner I sampled wines from the other three vineyards, 2013 and 2015 Viogners respectively from Barboursville and Veritas and a Bordeaux style red from Boxwood, their Topiary 2014. These wines set the tone for the evening, they were all elegant and well crafted. The Viogniers were fruity and fresh and the Topiary smooth and well structured.

A starter of beetroot cured salmon with crab, lobster and avocado was matched with a Barboursville Chardonnay 2014 and a Boxwood Rose 2015. They were introduced by Rachel Martin of Boxwood and Luca Paschina from Barboursville. Both wines were bright and uplifting and worked well with the fish. The single varietal chardonnay was fruity and had not been oaked allowing the natural flavour of the grapes to show through. The rose was dry, made with a blend of Cabernet Franc, Merlot, cabernet sauvignon and Malbec grapes in traditional Bordeaux style.

The main course of lamb rump needed something quite robust and three wines were proffered. The Barboursville Octagon 2014, the Boxwood Topiary 2010 and the Veritas Petit Verdot 2010. For the presentation Rachel and Luca were joined by George Hodson from Veritas. The Octagon had a Bordeaux character and was a blend of merlot, cabernet sauvignon and petit verdot. It had rich plummy notes. The Topiary was an elegant red wine again in Bordeaux style, it was a blend of cabernet franc and Merlot grapes showing well balanced tannins. The final wine was very interesting, made by Veritas with 100% petit verdot. This grape is usually added to a blend to give balance and structure. This wine gave full throttle to petit verdot, it had the most profound and earthy qualities.

The last wine of the evening was from Veritas, their Petit Manseng 2013 which was paired with the pudding a Vanilla Custard. This was a sweet wine with luscious flavours of tropical fruits like pineapple and mango. There were balanced with a crisp acidity to make it the ideal wine with dessert.

During the evening we heard from Terry McAuliffe who proudly announced that the 275th winery had just opened in the State. As Governor he is a very enthusiastic supporter of the wine industry.

This had been a fascinating tasting which had showcased the quality of the wines being produced in Virginia. The grapes and styles are all familiar to the European palate and the skill of the vintners put the wines into the world-class category.

Many of these wines are available in the UK from good wine merchants and you will also find them on the lists of restaurants.

If you want a holiday with a different then the State of Virginia is well worth a visit. Accessibility is via Washington DC airport (which is actually in Virginia). When you are there you can stay on some of the vineyards, follow wine trails, find out about the long history of US independence, enjoy the cuisine and listen to first class country music.