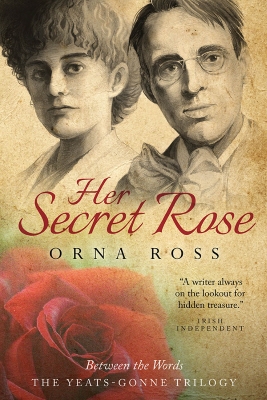 I am such a fervent admirer of the poetry of Yeats that having read as much as I could of it, I attended a Yeats Summer School, wandered beneath Ben Bulben in Sligo and visited his tower in Gort. I also collected books about him and his beloved Maud Gonne and when I lived in Dublin I even got a friend to take me to Roebuck House where she had lived and introduce me to her daughter-in-law. Thus it is not surprising that I was eager to read this book detailing their relationship.

Sometimes however, it may be better not to know too much about one’s heroes – and I confess that finished this book with mixed feelings as in fact neither of the two main protagonists sustains a very noble role throughout its telling.

I was of course aware of the basic facts – Willie, a shy, impecunious young poet is hopelessly in love with the very beautiful Maud Gonne who fails to return his love and who, although British, devotes herself almost fanatically to the cause of Irish freedom. This unrequited love coupled with their joint exploration of Irish folk and faery lore, results in some of his best poems and plays and fuels the Celtic Literary Revival in which he plays a key role.

At the very beginning of Her Secret Rose, Orna Ross issues a warning via her narrator ( more of her later) who says, “They were gods to us…That’s how they put themselves across…” And yes, I was aware that in most of the autobiographical material they published themselves they omitted or skirted round huge and important happenings. Maud herself in Servant of the Queen failed to mention her French lover Millevoye and claimed her illegitimate children were adopted. Yeats too wrote his memoirs as a sort of ‘reverie,’ perhaps because as one of his editors puts it, he was not, ‘not given to the intrinsic pleasure of confession.’

In writing this trilogy Orna Ross has done something very courageous in shining a light into corners of these lives and revealing things which have been kept in the shadows for years. It is extremely well researched – the narrator says at the outset, “I read everything they ever wrote, their memoirs and books and the diaries and articles and letters in the libraries, hundreds and thousands of words between them…” and one senses that this is exactly what Orna Ross has done.

She remains faithful to the facts while also providing some interesting psychological analyses: Maud’s close relationship with her father and Yeats’ relationship with his troubled mother and his siblings are shown to have repercussions later in their lives. In fact by painting more human and less heroic portraits of the protagonists Orna Ross presents us with real people and if these characters are paler and less sympathetic than my own long-held imaginings, the fault is mine.

With reference to the way the story is told, I felt the narrator, Rosie Cross, supposedly an Irish girl interested in the couple, who has put this story together, was somewhat redundant (although she may come into her own in the further volumes, this is the first of a trilogy) and the traditional omniscient narrator might have served the author better . This because there are a number of things in the book which Rosie describes which she could not have witnessed or even heard about. These include the chilling scene where Maud asks Millevoye to make love to her at midnight in the tomb where her little son lies dead in order that he, the little boy, can be reincarnated in a new baby. Yeats knew of this macabre event (their interest in the occult was a strong bond) but it was so deeply secret that nothing was published about it until long after his death. However in this volume Rosie appears so sporadically that one tends to forget about her and what she knows or doesn’t know is rendered unimportant.

The book is easy to read, absorbing and in the main, well written, although I did come across a few infelicitous expression which spoiled the atmosphere. Maud is described as being ‘a teensy bit bored,’ someone refers to her saying, ‘the lady’s not for turning’ and 1891is described as ‘her annus horibilis,’ all of which jolt us out of period.

These however, are minor blips in an otherwise fascinating book. I am sure that anyone who reads it will look forward to the further volumes. I know I shall.