Her side of the War. Remarkable women at the centre of WW1 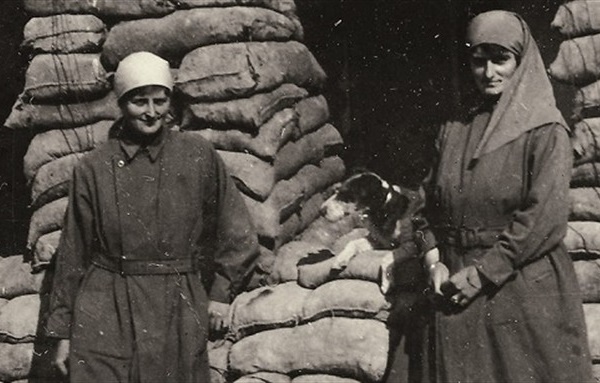 The Great War was not an exclusively male affair. Some women became icons for their generation and others had extraordinary lives which were unrecognised at the time. During 2016, the lives of some of the women, who contributed to the war effort in Belgium, are being showcased through a series of events across Flanders Fields. In particular, the work of two British women, Elsie Knocker and Mairi Chisholm is told in an exhibition at the Yser Tower in Diksmuide, which runs from April 2016-January 2017.

Elsie Knocker (29), a trained nurse, and Mairi Chisholm (18) met through a shared enthusiasm for motor cycling, a most unusual hobby for women in those days. They would roar round the lanes of Hampshire and Dorset competing in motorbike and sidecar trials, already showing their courage and determination to succeed in a man’s world. They were recognised for their outstanding contribution to saving soldiers’ lives with seventeen awards including Belgium’s highest honours, awarded by King Albert I, the British Military Medal and made Officers, Most Venerable Order of the Hospital of St. John of Jerusalem. Their story is remarkable and captures the British spirit at its finest. Whilst their courageous acts around the WW1 trenches kept them busy, they still found time to hold polite tea parties! They were also visited by Marie Curie and her daughter, who were interested in their war efforts.

In 1914, Elsie and Mairi joined Dr Henry Munro’s Ambulance Corps, where their driving and understanding of mechanics were appreciated. At first, they spent their time at the Front driving ambulances to gather casualties across the Yser Front Line around Nieuwpoort, Diksmuide and Ypres. With the help of a Belgian Army Doctor, Elsie and Mairi set up an Advanced Dressing Station in the cellar of a house in Pervyse yards from the trenches. They had to move and rebuild twice more due to being heavily shelled.

Their efforts were not initially recognised by the Belgian or British Red Cross or the Army, forcing them to rely on donations to fund their efforts. Their donations included a door from Harrods and at one point a benefactor organised a weekly hamper from Harrods and a Douglas motorcycle. Eventually, The Allied Council in Paris recognised that the wounded in Pervyse arrived at hospital in much better condition and agreed to let them stay as the only exception of women on the Western Front as ‘the presence of female personnel in medical units on the military front was not permitted’.

Both were keen photographers, but as their fame grew they became the most photographed women of the war and began to receive visits from journalists, photographers and VIP’s of the day including titles such as Tatler and Ladies Pictorial as well as The Times and The Telegraph.

Visits to Diksmuide, Nieuwpoort and Ypres combined with the exhibition, make an enjoyable and interesting short break.

‘Her Side of the War’- full details of events and exhibitions www.visitflanders.com/en/her-side-of-the-war/index.jsp