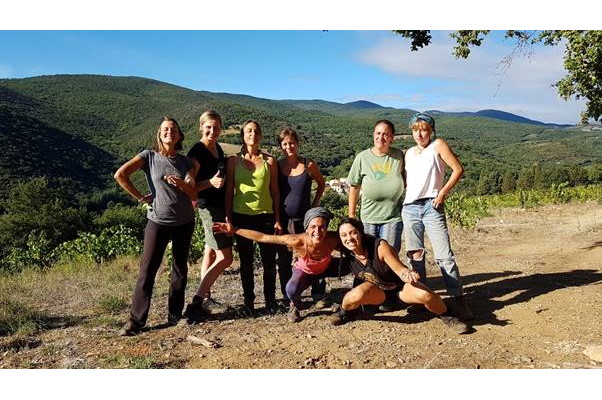 Vineyard manager Wendy Paille (second on left) finished harvesting Le Soula’s grapes in the mountains of Roussillon in the 2nd week of October.

It has been one of le Soula’s toughest harvests, with massive summer heat followed by a plague of swine bursting un-invited through the steel fencing in the run-up to the picking season. The Syrah, in particular, was aggressively attacked by wild boar.

“Harvesting had to be brought forward to beat the boar to the grapes, although the last of the old vine Carignan came in at a potential 13 degrees, which is pretty respectable. It was very resistant this year. We managed to push the maturity and have had maceration up to almost 3 weeks on the skins. The juice is expressing lovely aromas of fruit and flowers.

“We lost a high percentage of our Marsanne and Roussanne, eaten by the boar, as our 4 wire electric fencing was clearly not a strong enough deterrent. And we lost 1 hectare of young Sauvignon blanc and over half of the rest of the white varieties. But the volume and quality of the remaining grapes are very good.

“July saw temperatures in the Roussillon reach 40 degrees, although Le Soula’s high altitude vineyards and cooling mountain breezes allowed the vineyard to escape the worst of the extreme weather. While the vines didn’t suffer too badly from the heat, the local wild boar population grew thirsty, and the drought drove them to ravage the vineyard in search of the moisture contained in the grapes. Fencing against 180-kilo boar with a raging thirst is almost impossible.

“Le Soula’s vineyards are worked biodynamically in widely spread parcels, with the oldest vines dating back to 1919. There are 10 hectares of white grapes, with local varieties like Macabeu, Grenache Blanc and Gris, and Malvoisie du Roussillon, plus imported varieties such as Sauvignon Blanc, Marsanne, Roussanne and Vermentino. Le Soula’s vineyards include twelve hectares of red varieties including traditional Carignan and Grenache Noir, and with non-native Syrah imported for cooler sites.

“We respect the rhythms of nature, working within the lunar cycle”’, says Wendy. We allow the phases of the moon to influence when we apply treatments or carry out essential work in the vineyards, and we think this has helped us in this difficult harvest”,

Proprietor Mark Walford adds: “I believe that our policy of biodynamic viticulture is increasing the quality of our wines. Biodynamics allow us to reach full phenolic ripeness earlier and therefore with less sugar, resulting in lower alcohol levels and better acidity. We let our terroir express the style. Our wines are more Burgundian in nature and less overtly Southern in character.

“The Rouge has developed increased elegance and is less trenchant than earlier vintages, with gentler tannins. The Blanc is now more complex, but with less fulsome power. I think the alcohols for both wines will also become lower, as the plants have less stress. We expect the wines to have the same ageing potential.

“In the cellar so far we are seeing a slow fermentation – or not at all – for the malolactic. We picked early to save the fruit. Generally, we will see low alcohol on the whites.”

Le Soula’s grapes are grown in Roussillon’s highest altitude vineyards, 45km west of Perpignan. At 350 to 660 metres above sea level, the heat of the southern sun is mitigated by the cold and rain of the mountains, and the temperate effects of the Tramontane and Mistral winds.

Fields, Morris & Verdin are the UK distributors for Le Soula. Soula sells mainly in France and England, with healthy markets in Canada, Germany, Belgium, Japan, and the US.