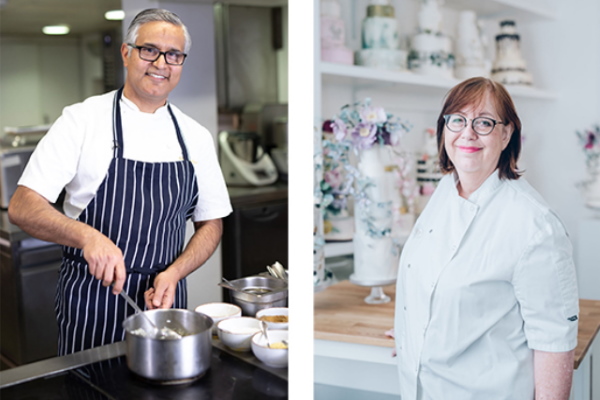 Filmed from the kitchen of Atul’s popular restaurant Kanishka in Mayfair, his course will take you through North, West, South and East India, highlighting the vast differences in national specialities from Kerala, West Bengal, Kashmir and Goa. Students will receive direct feedback from Atul himself along with support from other students on the course so you can discuss successes and tips for improvement!

Breaking down the myth that Indian food is too complicated to cook at home you’ll learn how to prepare a traditional Meen Moilee, Macher Jhol, Rogan Josh and Chicken Xacutti and will finish the course with enviable cooking skills that will transform your attitude towards Indian cooking.

Also joining the line-up of experts is award-winning cake designer Rosalind Miller. Producing the best wedding cakes in London and the UK, Rosalind has previously made cakes for wedding TV, regularly designing show-stopping cakes for Harrods and even royalty.

The course will begin with an introduction to Rosalind Miller before guiding you through the basics of cake baking, mixing ingredients and flavour variations before moving on to learning the secrets of Swiss Meringue, Buttercream filling, layering and cake decorating. With detailed feedback from Rosalind, you’ll be finishing the course with a six-inch, layered, lemon sponge with a watercolour marbling effect – sure to impress a loved one for their birthday this year!

Learning with Experts is the only online course company offering one-to-one tuition with the best of the best. Other Food & Drink courses available on Learning with Experts include Classic French Cuisine with Michel Roux Jr, Wine Appreciation with Amelia Singer and an introduction to Bread Making with Richard Bertinet.